As one of the more favourite eco friendly hotels in Sri Lanka, we at Kalundewa Retreat wish to make your holiday most enjoyable and meaningfully memorable in many ways. Among numerous ways to spend your time, you also have the option to stretch yourself from just observing to actively involving yourself in agro tourism and briefly experience the life of a farmer!

In Sri Lanka, cultivation is strictly divided into two main seasons; namely, Yala & Maha. The main cultivation season is the Maha season which commences in early November and ends in March. Yala season commences in April and ends around early October. The timing of the commencement of agricultural activities in these two seasons coincides with the two main monsoons, namely the North/ East Monsoon and South / West monsoon. The North / East monsoon commences by end October or early November and records the highest rainfall for the year and is therefore, most suitable for paddy cultivation. The South/ West monsoon normally commences in early May and records very much lesser rainfall and is ideal for vegetable cultivation. Around forty-five acres of land is brought under cultivation at Kalundewa Retreat during these two seasons and much activity can be seen in the fields and affords the best opportunity for guests to familiarize themselves with the traditional methods of cultivation adopted in the dry zone of Sri Lanka and also engage with the rural farming community.

The season commences with a traditional “Wap Magul Ceremony” or the “Ceremony to Plough fields”. Here the hotel guests can join the farming community. This traditional ceremony commences with the ploughing of the first field with buffaloes and ends with the serving of the “Ambula”, the traditional meal at the field.  The ceremony also highlights offerings to the ‘Deities’ for a successful season of cultivation.

Guests could also learn to observe or participate in traditional as well as modern methods of land preparation. Traditional methods include ploughing the fields using buffaloes, methods used to control weeds by flooding the fields, observing the very intricate methods of diverting water to the entire plot of land, levelling of the fields to ensure equal and efficient distribution of water etc. Guests can opt for a guided tour with our resident naturalist or just walk around themselves, interact with the farmers, and make their own observations.

1st to 20thDecember – Sowing of paddy and transplanting of seedlings into the field.

Guests could join the farmers in community weeding of the fields, observe the traditional methods of pest control such as “khema” etc. and share a meal with the farmers.

The first harvesting ceremony commences under the patronage of the owners of the land. Hotel guests could join in this colourful and interesting event organized with the participation of all farmers and hotel staff. The first sheaf of paddy is traditionally harvested by the owner of the land.

This is a season of much rejoicing by the farming community on the successful cultivation of their fields. It also heralds the beginning of the New Year season of the country. The day’s events will again end with a traditional “Ambula”, served by the owners of the field.

Mid April to end May –Preparation of fields for vegetable cultivation, establishment of plant nurseries.

A large and varied variety of vegetables are cultivated during this season. Onion, chillies, aubergine, okra, sweet potato, radish, beetroot, leeks and ground nuts usually fill the fields during this period.

According to the types of crops, nurseries are set up and planting of seeds take place. After a few days’ time, seedlings are transplanted in the fields.

Hotel guests can do a field tour with our resident naturalist, learning different farming skills of this phase.

A field tour could be organized for guests.

September to October – Harvesting of crops.

Harvesting of crops is an enjoyable activity.  Guests could work alongside the farmers and give a hand to them. They could observe the traditional participation of family labour and could also be encouraged to take a ride with the farmers to the market at Dambulla and see for themselves the methods of purchase and disposal, which are both interesting and novel. The system of unofficial banking linked to cultivation and disposal of produce would be of much interest to guests.

Kalundewa Retreat is the only hotel that boasts of over thirty varieties of fruit trees within its extensive premises. The main fruiting season is from March to May and again from August to September and in rare instances, in December.

Under the direct supervision of the Chef of Kalundewa Retreat, a herb & vegetable garden is grown. Over 150 varieties of plants are planted in its greenhouse or outside for exclusive use of its guests. Guests could visit this facility with our chef, touch, feel, learn and smell their aromas of some of the exotic organic foods that will be included in their meals! 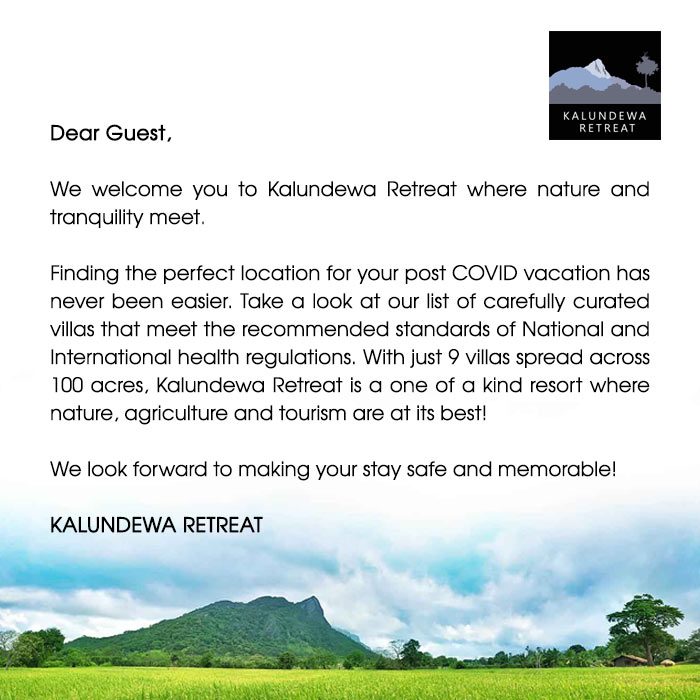